The argument about Bias Frames

Until now I have not really used bias frames in my preprocessing (I attempted on the first few imaging attempts ever since I was told I should but quickly stopped using them). I decided to shoot some with my last imaging session and have been trying to compare whether or not they helped at all in the image.

I did the exact same processing from stack to finish on all three variations except how the bias frames were applied. The first comparison set is just a center crop of M51 from my full frame.

So the 1st and 3rd appear identical (even when blinking between the two on a super-zoomed level) The 2nd seems the worst, which is what I suspected as I had been told if you add the bias to both the light and dark in Nebulosity it will basically add it back in.

From this comparison (and the 200% crop) it really almost doesn't seem worth it.


However, since I posted this observation on various astronomy forums I frequent I have all but gotten "shot at dawn" as one guy so eloquently put it. I have been told that flats WILL NOT work if you don't apply bias frames to them (interesting since I have not used bias frames since I started imaging and my flats have been working perfectly well) ... I have also been told that I really only need them if I am going to use scaled darks, which makes much more sense to me than the "nothing will work right if you don't use them" argument.


Seeing as they take almost no time to shoot and add into my pre-processing steps I might as well use them to avoid further ridicule but seriously - see if you can really tell a difference in these 100% and 200% crops of the M51 image I am currently imaging. 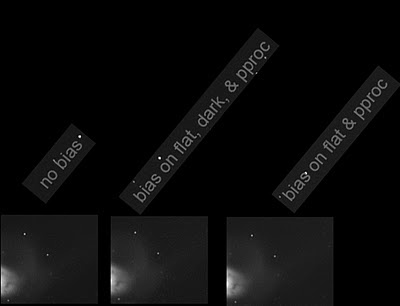 
Since I don't use scaled darks this explains my results and I am officially ignoring all the contradictory and argumentative (& some downright rude) comments I have been getting to this question on my astronomy forums.