Note: This review can be downloaded as a pdf at: http://www.eprisephoto.com/nikon-d7000.pdf

Although my first astrophotos were taken with a DSLR I quickly steered clear of DSLR astrophotography for a few reasons. First, I use my camera (at the time a Nikon D40) for my regular photography jobs and therefore was not going to get it “astro-modded”. Second, it was beyond noisy. Rather than having a field of stars with a few hot pixels, images were coming out as a field of hot pixels resembling a children’s paint splatter painting with a few stars and perhaps a galaxy thrown in for good measure. Dark frames helped, but even proper calibration only did so much for the overly noisy images. Third, I found a used ccd camera for a good deal and after trying it out once, despite the limited FOV from a small chip, found it much better in terms of image quality and lack of noise. I see fantastic results from DSLRs so I know it can be done, but my few experiences had been nothing more than an exercise in frustration. Fast forward a few years and I found myself upgrading to a Nikon D7000 camera. At the time, I had no thoughts of resuming DSLR astrophotography when I purchased it, but after a few months I decided to give it a go.
Testing out the D7000:
After attaching the D7000 to my scope and setting up the DSLR-USB IR sensor so I could set up a sequence via the computer I set about focusing. The D7000 has “Live View” which I was going to use for focus but once I switched to it I realized that while I could see the star I wanted to focus on, it was going to be too dim to accurately focus. I was able to get it close but then switched the live view off, put on the Bahtinov mask, and took a 2 second exposure. It was close enough that it only took me a few moments to fine tune the focus and lock the scope. I found the guide lines in the viewfinder when the shutter is pressed (which light up a dim red) very useful for framing my intended target of the night, M31. I set my ccd up as an autoguider and set “DSLR Shutter” (the program I use on the computer to control the IR sensor on the DSLR-USB IR to take a 10 min exposure and ... nothing. No shutter click to let me know the image had begun. I had the menu settings to “Quick Response Remote” but the D7000 has a roll bar underneath the left selector wheel (where you select M for manual, Auto, etc) that you also have to roll over to the remote picture. Once I had done that, I reset “DSLR Shutter” and off it went. 10 minutes later I checked the result and was pleasantly surprised. At ISO400 (I kept the ISO fairly low since the moon was going to be coming up soon and because I was used to a VERY noisy DSLR in the D40) the image was crystal clear. Andromeda looked great as did the stars and color across the whole image. Obviously the preview screen was always bound to look better than the full-sized image but no glaring problems were obvious so I set “DSLR Shutter” to take a set of 12 ten minute subs and let it shoot. I went back out 2 hours later to find that battery hadn’t even drained 1/4 of the way (also a problem I had with series’ with the D40) and I now had 13 subs of M31. I took a few darks for good measure and brought them all in to check out.
D7000 Settings:
Before I get into the results of the evening I want to give you the settings and menus where I set those for the session. These are the only camera settings I changed, everything else was left to its default and no “in-camera noise reduction” was used.
Results:
They say a picture is worth a thousands words, so I will show these results I will start by showing you what a single 10 minute dark sub looked like. All I have done to this was convert it from RAW to a tiff file and then used levels to stretch it so you can see the noise pattern (otherwise it looked completely black at this size).The darks look pretty good to me, especially for a 10 minute sub. Once I combined the 6 I took after my session I had a nice Master Dark to use for calibration. 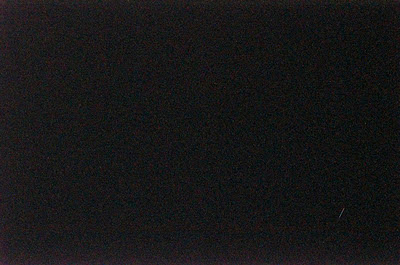 Before I did that I did a quick process of an uncalibrated single 10 minute sub of M31 just to get a “before”. This is a crop of the edge of the galaxy. No darks, flats, or bias frames and just a few processing steps comprised of levels and curves. 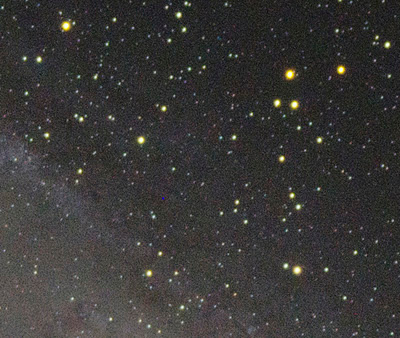 I was floored that even a single 10 minute sub with a mild amount of stretching had such little noise! Granted it was a cool evening (40 degrees fahrenheit) but the inherent noise of the D7000 is exponentially lower than the older D40.  The noise was so low in the single stretched sub that I went ahead and did a stack of the uncalibrated subs. Hot pixel streaks were very minimal and in a pinch I believe I could even get away without shooting darks on a cool fall/winter imaging evening.
I did, however, apply the Master Dark to the subs before I brought them over to be de-Bayered, aligned, and stacked for the final processing. I used several programs to compare how the image looked from the raw stack (Registar, Maxim DL, and Nebulosity), all three came out looking fairly decent but I used the Maxim DL stack for the final process as I found it did a better job on the balance of colors from the Bayer matrix. I used solely Photoshop CS5 for the post-processing, although I do have several plug-ins in addition to my own action set that I use for the processing. I ended up not using any noise reduction in the final process.
Conclusions:
For a “first light” for the camera, astrophotography-wise, I would have to say that the D7000 has completely changed my opinion of DSLR astrophotography. Not only does the camera produce crisp, clean images that are relatively noise-free (at least compared to my previous experience with DSLR astrophotography), but the efficient use of the battery allows an evening of shooting without having to worry about the battery going out mid-exposure. As I had this only a fairly low ISO setting (400) I might have to try to shoot some fainter nebulosity with a higher ISO in the future and expand my DSLR astro-gallery. All in all - a great camera in the day or night that I would highly recommend. 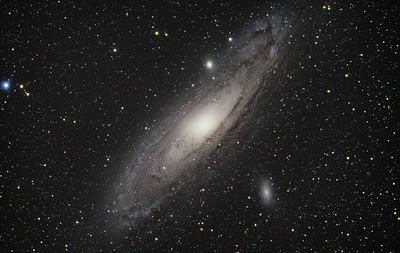